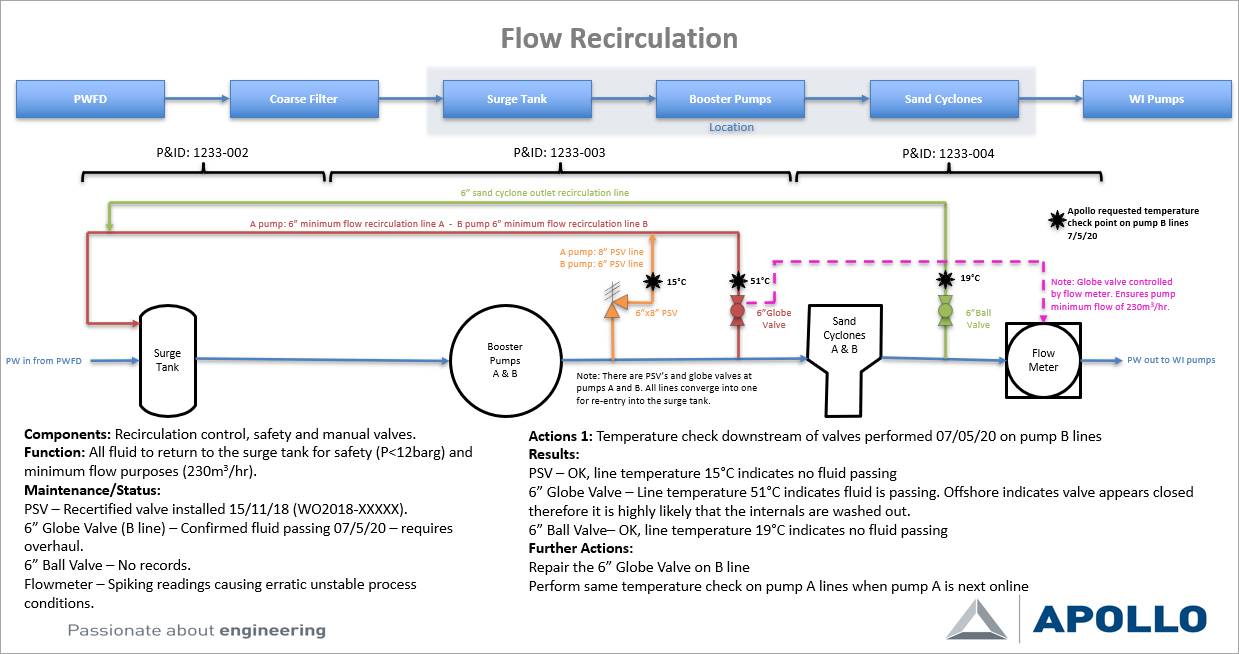 Our client approached Apollo concerned that their FPSO wasn’t performing as it should be. High oil in water concentrations were also present since recorded spikes in concentration in 2018.

Apollo investigated the capacity of the two produced water booster pumps to see if there were limiting production and created a cause map to identify any other potential bottlenecks in the produced water system. The causes of the step change in oil in water concentration seen in 2018 and system hydrocyclone and separator performance were also investigated, to help with getting the concentrations back on track.

Apollo and the client kept very close throughout the project meaning that results were being reported in real-time, answering questions, requests and providing input regarding other shared current investigations and findings. This also meant that the scope of the project could be changed to meet the clients needs as required.

The FPSO was designed for a flowrate of 120,000 barrels per day, however, when the client approached Apollo it was producing between 80,000-93,000bbl/day.

The sand in the separation and produced water system causing issues in the FPSO resulting in lots of downtime and the replacement of materials and parts was thought to be the main culprit.

Apollo used both mechanical and process teams to examine the produced water system through cause maps and investigate the performance of the produced water reinjection pumps to see if these were bottlenecking the system, along with maintenance records and recent inspections of the instrumentation in the system to identify other possible issues. Recommendations regarding maintenance and inspections were provided to aid with system equipment integrity, along with booster pump performance recommendations. System readings from PI were interrogated to identify the cause of the spikes of oil in water concentrations recorded in 2018. The performances of the separators and hydrocyclones were also investigated to evaluate if these were causing the continually high oil in water readings, with recommendations provided to remedy their shortfalls.

There were aspects of the original planned scope that was not undertaken (assessment of the sand cleaning package). Early on, the client informed Apollo that another company were still performing a higher-level review of the sand management facilities and that the project had overrun. It was planned for Apollo to take the findings of that review as a starting point for our more in-depth scope, however, to avoid a duplication of work Apollo and the client agreed to change the priorities by focusing on the produced water system bottleneck issues and identifying issues there.

A series of technical notes were delivered from the Apollo process and mechanical teams which collated all the relevant performance and integrity findings identified many potential issues and ultimately provided recommendations to bring the system’s performance back in line. Discipline-specific and full project team meetings were held on a weekly basis so key findings could be discussed, allowing for planning and additional actions to be performed on a real-time basis throughout the project. All of this was managed on time and within budget even though the COVID 19 lockdown started right at the beginning of the project.

The client was delighted with the involvement from Apollo. Coming to an engineering company and not an equipment manufacturer meant we would view the problem holistically.

Comments received from the client included:

and that we have “positioned ourselves very well for a long term, ongoing relationship.”