Meet our new graduates and apprentice! 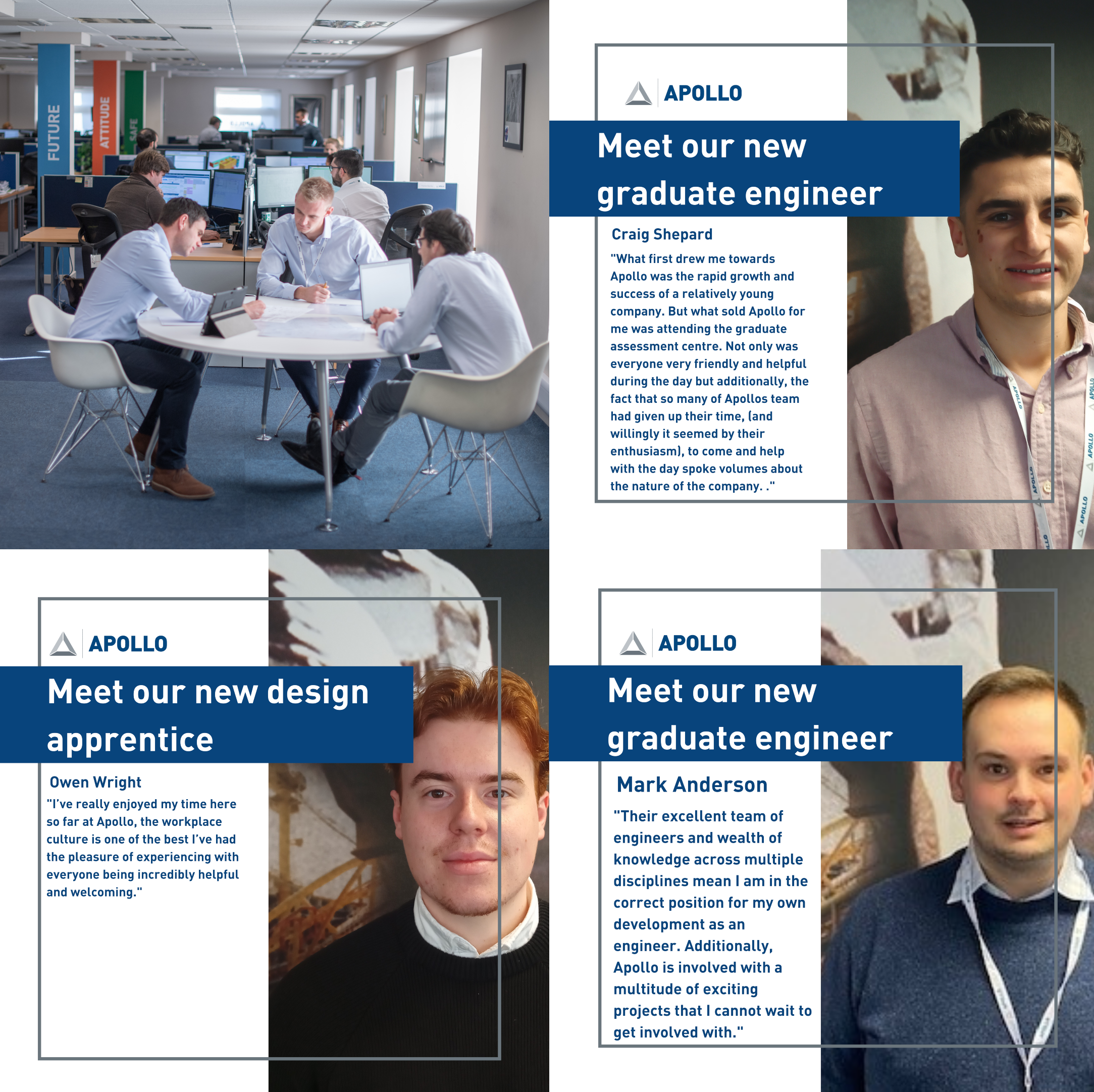 In April we welcomed two new graduates, Mark Anderson, an Electrical Engineer and Craig Shepherd, a Structural Engineer. We also welcomed a new Structural Design Apprentice, Owen Wright after we had a graduate assessment day in March.

After being at Apollo for a few months we wanted to catch up with them and see how they were getting on.

Mark: After finishing school, I attended North East Scotland College where I spent 2 years completing my Higher National Diploma in Electrical and Electronic Engineering. I achieved an A grade for my HND and was able to gain direct entry into third year of Electrical and Electronic Engineering at Robert Gordon University later graduating in December of 2022, achieving a distinction. During my time at university and college, I have had the pleasure of working within the subsea industry and gaining valuable experience.

Craig: Growing up in Westhill outside of Aberdeen, I then attended the Robert Gordon University where I complete a fast track (4 year) MEng in Mechanical and Offshore engineering and graduated with a distinction. During my studies there I completed placements in both the aviation and oil and gas industry.

Owen: After finishing school, I went on to study Mechanical Engineering in college. During this time, I worked in the hospitality industry for 7 years. I always wanted an apprenticeship, but opportunities were sparce especially after being out of school for a few years. I then worked for a civil engineering company for a while which helped me to establish some experience for my current role here at Apollo.

Mark: I am fortunate to be working on a high-level conceptual project, in which model building in MATLAB and Simulink is required to give proof of concept for a valued client. Additionally, I have had the pleasure of witnessing the live mating of our PALM connector and getting to learn more about the exciting product.

Craig: So far, I have been involved with a variety of projects and exposed to a lot of different activities at Apollo. Predominantly I have been involved in preparing calculations for clients and this is utilising the skills I developed in university. This has been rewarding as I have been using my education to add value to Apollo almost immediately since joining the team.

Owen: In my small time here I’ve already done so much, and I couldn’t be happier about it. I’ve already worked on a range of jobs that have required a variety of different approaches. The first that comes to mind was a scope a colleague and I had to laser scan on a rig in the Cromarty Firth, there were definite nerves going offshore for the first time, but I couldn’t have asked for any more support from the team here.

Mark: Apollo is passionate about engineering and driven by our fantastic SAFE values and I wanted to be a part of that. Their excellent team of engineers and wealth of knowledge across multiple disciplines mean I am in the correct position for my own development as an engineer. Additionally, Apollo is involved with a multitude of exciting projects that I cannot wait to get involved with.

Craig: What first drew me towards Apollo was the rapid growth and success of a relatively young company. But what sold Apollo for me was attending the graduate assessment centre. Not only was everyone very friendly and helpful during the day but additionally, the fact that so many of Apollos team had given up their time – (and willingly it seemed by their enthusiasm), to come and help with the day spoke volumes about the nature of the company. This was clearly an organisation that valued being welcoming and obviously enjoyed spending time and working together. This meant I left the assessment centre with a desire to join a workplace as enjoyable as Apollo’s.

Owen: From my first introduction with Apollo, I knew I wanted to make my start here from the team I work with everyday to the ambition of its future across different sectors leaves me confident I’m where I need to be to grow as a Designer.

Mark: I have been here just over a month, and I feel I am settling well. The environment created in the office matches those set out by their SAFE values and I am really enjoying my time here.

Outside of work Apollo partake in many activities, I had a blast when we travelled up to Boyndie on the weekend to take part in some go-karting, even though I wasn’t the best at it! I am looking forward to integrating further with the team both in a professional and social setting.

Craig: My first few months at Apollo have been as enjoyable as expected. Everyone I have worked with so far has been friendly and patient when helping me get up to speed with Apollo processes or learning new skills entirely. I’m now completing my work more autonomously and I’m most looking forward to the opportunity of joining a project from its inception. It will be gratifying to be involved with and complete a project for Apollo in its entirety, as well as benefiting from the exposure to many more project activities at Apollo.

Owen: I’ve really enjoyed my time here so far at Apollo, I feel like I’ve been handed the tools to really shape my future in this industry with the full support of my colleagues and managers. On top of this, I find the workplace culture one of the best I’ve had the pleasure of experiencing with everyone being incredibly helpful and welcoming. In the near future, I look forward to getting more experience in my field to be able to assist in upcoming work.

We’re looking forward to welcoming another Process Graduate in September!